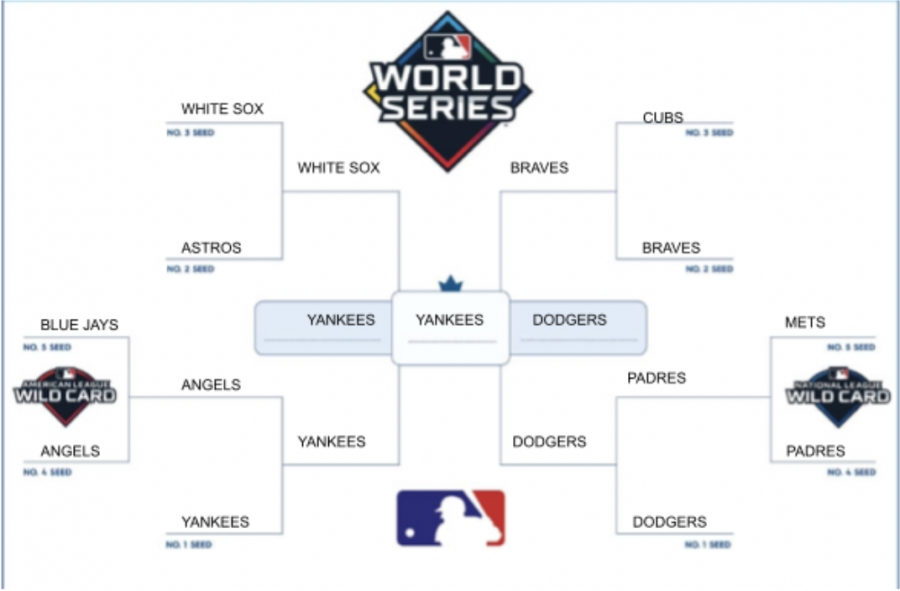 Cooper’s bracket predicts the season will end in a Yankees/Dodges World Series match-up.

Cooper: What you need to know about the MLB this year

At long last, baseball is back. After a unique and shortened season, the MLB is looking to come back strong. Here’s what to expect from America’s Pastime in 2021 (from the opinion of someone who spends too much time on baseballreference.com). Though some of the picks in this article may seem a bit out there, I believe it is my duty to expect the unexpected rather than bet on the most likely outcome.

Batting Average: The amount of hits a player gets as a percentage of their at-bats. The best players hit around .300-.350.

OPS: On-base percentage (times gotten on base divided by number of at-bats) added to slugging percentage (batting average adjusted for home-runs and extra base hits). Meant to be a measure of a hitter’s overall value. The best players have an OPS of around 0.900.

ERA: Earned Runs Allowed, or the amount of runs a pitcher gives up every nine innings. The best pitchers have ERAs under 3.

Two-Way Player: A player who both pitches and hits at an elite level. This kind of player is incredibly rare.

Prediction: New York Yankees 4-2 Los Angeles Dodgers A Yankees-Dodgers world series kind of feels like a Lakers-Celtics NBA finals: it’s a “classic matchup” that really only pleases the fanbases of the two teams involved and gets everyone else to start feeling a bit tired of watching the same matchup (which it has been, for the tenth time). However, it is the most likely outcome...

Much like the East, the AL West has two very strong teams. I predict the  division winner will likely be the Houston Astros. Jose Altuve, Carlos Correa, and Alex Bregman run oneof the best infields in the league. Michael Brantley and Kyle Tucker help run a strong outfield as well. After George Springer left, however, the Astros have fallen from their glory days. Still, most of their core is still go...

Being one of the stronger divisions in the league, many have speculated over wildly different expectations for the AL East’s standings. However, I have yet to see a prediction that does not put the New York Yankees in first place, whose combination of power hitters (Aaron Judge, Luke Voit) contact hitters (DJ LeMahieu) and pitching strength (Gerrit Cole, Corey Kleuber, Zack Britton, Aroldis Chapman) will surely ...

The central  division has less overall talent, which arguably makes it a more interesting division to forecast.  There are three candidates that could each reasonably finish in first place. My personal favorite  is the Chicago White Sox. This team is spearheaded by two of the best hitters in the game, Tim Anderson and Nick Madrigal. Sluggers Jose Abreu and Eloy Jimenez will hit many home runs in 20...

AL MVP: Mike Trout, Los Angeles Angels Trout finished towards the top of pretty much every power-hitting category in 2020. Though he had a down year in batting average, Trout is still an incredibly well-rounded player who should take advantage of the weak competition in his division. I believe he will return to batting over .300 and hit around 35 dingers this season. AL Cy Young: Shane Bieber, C...

Much like its AL counterpart, the NL Central has three teams that have a reasonable chance of getting a ticket to the postseason. The strongest team, by the skin of their teeth, is the Chicago Cubs. After underperforming in 2020, sluggers Anthony Rizzo and Kris Bryant will be back with a vengeance. Wilson Contreras and Javi Baez both look to return to their days of hitting Chicago into the promised land...

There are legitimate arguments that the NL East is the toughest division in the league right now. Many different people have speculated over who is going to dominate it this year. My money’s on the Atlanta Braves. Like the Yankees, the Atlanta Braves have a plethora of players that are good at both getting hits and hitting a lot of home runs (Marcell Ozuna, Freddie Freeman, Dansby Swanson) as well ...

The Western divisions in both leagues share an eerie parallel. They both have two playoff-caliber teams and three teams in need of a rebuild. The best of the NL West are definitely the Los Angeles Dodgers. Corey Seager, Justin Turner, Cody Bellinger are eager to get on base so that Mookie Betts can homer them in. After adding Trevor Bauer to a pitching staff already including Clayton Kershaw and Walk...

The Insight • Copyright 2023 • FLEX WordPress Theme by SNO • Log in